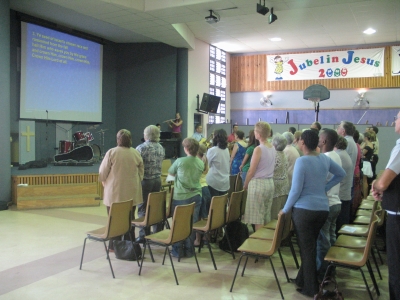 The planting of Grace Presbyterian was the end product of much prayer, careful discussion and an enormous amount of hard-work. The nursery rhyme says that “Grace is a little girl who forgot to wash her face,” and although we often feel just like that, the story of Grace Presbyterian is a fascinating one.
Grace’s conception lies in that when Emmanuel built their building in 2002, it was with the clear conviction that the “flavour” or “style” of the congregation was to be a smaller more intimate congregation. It was agreed that rather than growing the existing congregation, they would strive to plant new congregations with the same “DNA” that people had found meaningful at the “parent congregation.” It is from this philosophy that the need for planting Grace surfaced.
The Session of Emmanuel spent much time deliberating as to the timing and resources needed to plant a daughter congregation. They received timely support from other neighbouring Presbyterian churches and from the Dutch Reformed Church – NG Moreleta Park. The doors opened and all these stakeholders joined forces and resources to make the plant successful.
The first two years saw Grace Services being held in the old building of NG Moreleta in Rubenstein Street, but with the identity of Grace clearly established and in the light of subsequent events, it was decided to move Grace Services to Emmanuel’s buildings until Grace is able to purchase property and build a facility of its own.
Grace Congregation has been meeting in Emmanuel’s building since the beginning of 2009 and there has been steady growth through the year. We are ably served by Theo Groeneveld (Minister at Emmanuel) and Craig Smith (Pastoral Executive to Grace and Emmanuel) We hope to form a Session of Elders and begin to establish our strategic plan for growth into the future.